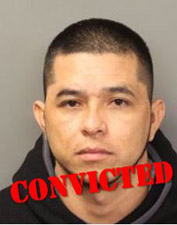 Investigators believe Adan Rivas victimized more than two dozen Bay Area families by soliciting landscaping and tree removal services. According to investigators, Rivas usually focused his attention on more affluent neighborhoods, often targeting the elderly. It’s alleged that after reaching an agreement with a homeowner, Rivas would take an excessive down payment and then abandon the job.

When Rivas was added to CSLB’s Most Wanted in July 2015, most of the alleged crimes occurred in the cities of Danville, San Ramon, Alamo, Lafayette, Orinda, and Walnut Creek. In October 2016 this page was updated to reflect that it was believed Rivas was also using the name Orlando Parras of Parras Landscaping and Pavers and victimized homeowners in both Alameda and Santa Clara Counties.

Rivas was arrested on April 19, 2017 in Medford, Oregon, on felony charges of aggravated first-degree theft, first-degree theft, and on his California arrest warrant. He was ultimately charged in Santa Clara County with 25 counts of financial elder abuse, grand theft, larceny, unlicensed contracting, and failure to provide workers compensation insurance. On September 15, 2017, Rivas agreed to a plea bargain and pled guilty to eight of the 25 counts. On November 1, 2017, he reported to San Quentin State Prison to serve a 20-month prison sentence.