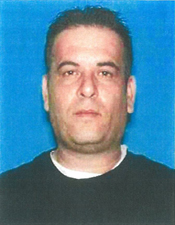 Current Location Unknown, possibly outside the U.S, Past residence in North Hollywood

Hamer, an unlicensed contractor, is considered a fugitive from the law with an outstanding $150,000 arrest warrant.

The charges are the result of a 2008 contract Hamer had with an elderly woman to perform work at her Anaheim home. What began as an agreement to install a small cabinet in the woman’s laundry room and gutters on a portion of her roof, turned into demands for additional payments and threats to file property liens.

The victim made 30 payments, totaling more than $154,000. A CSLB investigation determined the value of the work performed at the victim’s home to be $2,125.

Warrants were filed in 2012 for the arrests of Hamer and Yaakov Akula, whose company, Novatec Extension, allegedly employed Hamer. Of the $154,000 the victim paid, just over $69,000 went to Akula, also an unlicensed contractor.

In February 2013, Akula agreed to a reduced charge of Contracting without a License and was sentenced to three years informal probation, $40,000 restitution to the victim, and 30 days community service.