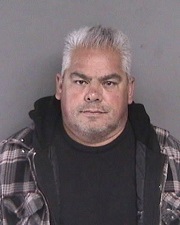 The Oakland Building Department issued a Stop Order because the work was performed without permits. After the Stop Order was issued, the homeowner continued to pay Fuentes-Palafox, however he did not perform any more work at the residence.

As of the date of CSLB’S interviews with the homeowner, she did not have heat or hot water in her home and reported she had not been able to live in her home for approximately 10 months because of this.

During the investigation, it was revealed that Jorge Fuentes-Palafox may actually be a person by the name of Sergio Fuentes-Aguilar. The Alameda County Sheriff’s Office – Criminal Identification Bureau (hereinafter, ACSO – CIB) was provided DMV information for both Jorge Fuentes-Palafox and Sergio Fuentes-Aguilar and it was requested they compare the two fingerprint images. In November 2019, an ACSO – CIB Supervisor advised the fingerprints Jorge Fuentes-Palafox and Sergio Fuentes-Aguilar were in fact the same person. ACSO – CIB also submitted this print to an Automated Fingerprint Identification System at an attempt to further identify the pictured suspect; however a match could not be located within Alameda County, Contra Costa County, or Department of Justice (DOJ) at that time.